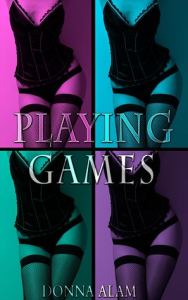 Everyone has secrets. What would it take to make you whisper yours?
Louise had no interest in relationships until one night turned her whole world around.
Hold me down. Kiss me hard. Fuck me harder.
A stranger in a strange city, she wasn’t looking to lose control. Until she did.
Intensely. Irrevocably. Dangerously.
She handed herself over to him.
One night. His rules. No names.
But he had other plans.
She’s an enigma. Unfinished business. Potential. She’s what he wants. Again and again.
And though the last thing he wanted to do was hurt her, it was on his agenda somewhere. Because relationships are messy and painful.

It’s not all about Playing Games.

*ARC Received in exchange for a review*

A one-night stand which becomes more! I was hooked right from the start to this new standalone from this author.I liked the character’s,amusing banter between both leads,other’s featured,sex scenes well written.It is a fairly quick read with an Epilogue which could possibly lead to more in the future!

Louise,a 26 year old American,in London for work purposes,has no interest in a relationship-that is until her encounter with Daniel(Dan)-a man who is used to getting what he wants,the way he wants,and in doing so,brings a hidden desire,something Louise didn’t think she wanted to the surface to be explored as the story develops.Add in to the mix an ex-wife,cute 6 year old son,hilarious friend/room-mate and secrets which of course come out, I did enjoy the story.

“Their eyes meet and for the briefest of moments,something recognisable was shared.Something that wasn’t just about sex or dominance,misunderstandings or hurt.Like meeting one half of the other;it was like finding a safe place”