Sometimes to escape a bad situation, you have to grit your teeth and bare your clause.
When competing hotel owners, the Carlyles, attempt a takeover of the former Brubaker hotel, now The Point Resort and also Kelsey Donigan’s second home, the front desk manager discovers long buried secrets between the two families. Better yet, she uncovers an escape clause that not only prevents a takeover, but may also overtake generations of animosity between the two families.
Kelsey finds an ally in the most unlikely of locals. Hotel heir Oliver Carlyle’s devotion and determination to honor his mother’s final wishes places him in direct opposition with his powerful family.
Can the star-crossed couple save the historic, beachfront hotel or will they lose each other in the process? 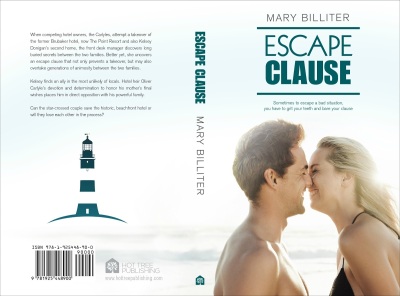 More From This Author

Mary Billiter is a weekly newspaper columnist and fiction author. She also has novels published under the pen name, “Pumpkin Spice.”Mary resides in the Cowboy State with her unabashedly bald husband, her four amazing children, two fantastic step-kids, and their runaway dog. She does her best writing (in her head) on her daily runs in wild, romantic, beautiful Wyoming.