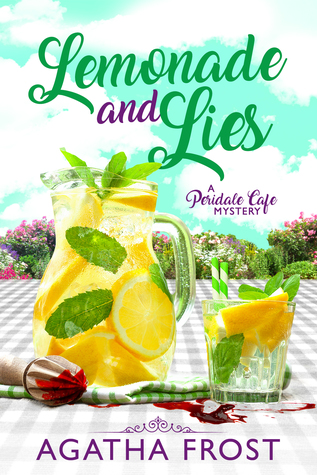 When the entire village is invited to a garden party for a mysterious ‘special announcement’, nobody expected that party to end with a man being thrown to his death from a window. The murder is committed at Julia South’s estranged father’s manor, so all eyes in Peridale turn to her to solve the case. In a race against the clock, Julia must juggle her blossoming romance with Detective Inspector Brown, and her young lodger, Jessie’s, sudden strange behaviour, to uncover the truth behind the man’s untimely death. With members of her own family in the frame, will Julia like what she discovers?

‘I’ve come to realise that not matter what I say you’ll do what you want’ (Detective Ins.Brown)

This is the second book in this series,which could be read as a Standalone,again features 37 year old Julia South who runs her little cafe,still to be divorced,Amateur Sleuth, now with a teenage lodger Jessie,who we met in book 1. This time the Murder Mystery that occurs,has a more personal note to Julia,as the scene of the crime is at Peridale Manor-where her Father Brian and his (same-age-as-Julia)’s Step-Mother Kate reside.As with the previous book,the writing is such that the reader is once again,sucked into the quaint village setting with its quirky residents,there are still secrets to be held and revealed,with the added ongoing will they-won’t they- budding romance between Julia and the Detective Inspector Brown.This time round,things get a bit more dangerous for Julia in her quest to discover the identity of the culprit.I’ll not go into anymore detail so as not to spoil it for other readers-experience it for yourselves.

I am loving this series,and again I add that the cover is very fitting and appealing to this ‘Cosy Mystery’ and even with the ‘Murder’ aspect,you can’t help but have a smile whilst reading.I am looking forward to reading the next book.