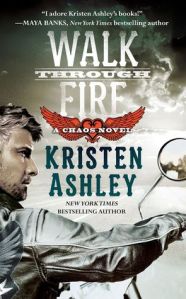 Millie Cross knows what it’s like to burn for someone. She was young and wild and he was fierce and even wilder-a Chaos biker who made her heart pound. They fell in love at first sight and life was good, until she learned she couldn’t be the woman he needed and made it so he had no choice but to walk away. Twenty years later, Millie’s chance run-in with her old flame sparks a desire she just can’t ignore. And this time, she won’t let him ride off . . .

Bad boy Logan “High” Judd has seen his share of troubles with the law. Yet it was a beautiful woman who broke him. After ending a loveless marriage, High is shocked when his true love walks back into his life. Millie is still gorgeous, but she’s just a ghost of her former self. High’s intrigued at the change, but her betrayal cut him deep-and he doesn’t want to get burned again. As High sinks into meting out vengeance for Millie’s betrayal, he’ll break all over again when he realizes just how Millie walked through fire for her man . . .

Walk through fire is about Millie and High (Logan, low) They were madly in love in their youth, Millie ditched High after 3 years but no-one ever knew why. They were perfect for each other. Millie was born to step in to the shoes of an old lady. So why after such an epic tale of love did Millie through it all away?

After 20 years Millie sees High in a Chipolte and from there things get explosive and very very dirty with a little heart-break thrown in for good measure. New friendships are made along the way.

Fuck them. All of them. Especially Logan. He was dead to me.

There is a lot of heart-break along the way. Millie’s secret broke my heart, I just wanted to hug her and slap High for being so blind!

I found from all the old ladies I connected with Millie more than the others. She was just existing until High came back in to her life with the usual bang you’d expect from Chaos. We also get a few povs from Tack and Tyra. I don’t want to give away too much to spoil the read. I only had one issue with the book and that was the length. I felt there was some bits that could have been removed and would have still kept the amazing story line running. but as always I got to the end of the book and wanted more.

I mean who doesn’t want more of a KA Alpha!