Out Now, purchase link below.

It’s been three years since she left everything she knew behind, but Jaxyn is finally done running, and returning home to Boston face the friends she abandoned without warning and the nightmare that still wakes her in the night.

Back in the childhood home that holds all of her memories from before life showed her that ‘happily ever afters’ don’t come easy, she is unsure of what the future holds. The one thing she definitely wasn’t expecting was Kyden McCabe, the hot, tattooed and pierced musician she meets her first night back.

All she ever wanted as a little girl was to be swept off her feet by a prince, but Ky is nothing like the heroes from the stories her mom used to read to her. He’s arrogant, frustrating and completely wrong for her. He lives his life one night stand at a time and she knows he’s nothing but trouble.

Still haunted by her past and afraid to let anyone see the scars she hides, she fights the attraction she feels for Kyden and wonders if she’ll ever find her storybook ending. Then a monster from her past threatens to rip away her chances before she realizes that maybe she already found it. 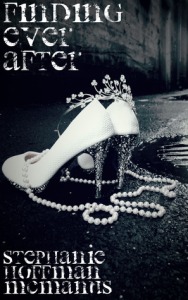 Vicki was given a copy from the author in exchange for an honest review.

I loved the idea of this story and the character’s created so much so that I ended up getting the other books in this ‘Ever After’ Series. It is not your typical Rock Star Romance.

Told from Jaxyn’s POV until the Epilogue which is from Kyden’s, It is a story which takes it time unfolding but I enjoyed the way the author wrote it.We don’t have the usual scenes there’s no un-planned pregnancies/secret child/drug use and it was a nice change from some of the other books I’ve read over the years.There are tears,laughter,sweet moments and character’s you will fall in love with (and a couple who you’ll be glad to see the back of!) Jaxyn and Kyden’s story is one that along with the rest of the series,I will re-read again. Although each can be read as a stand alone,it makes sense to read the whole series,as we do get more from each as the series goes on.